In a 16 September 2000 Article... "SCHOLARS are discovering mathematical complexity in the Music of JS Bach".  Can you believe this? Some scholars! Only now, just "discovering" this!? 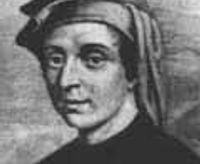 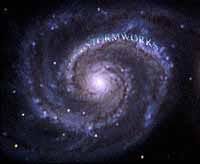 The STORMSwirl that Stephen has adopted as the STORMWORKS logo is part of a mathematical series called the Fibonacci Series, discovered by Leonardo Fibonacci. His original name was Leonardo Pisano Bigollo.  The Fibonacci series begins with 0, then 1, then 1 + 1 and continues to take the sum of the preceding two sums.  This series can be found in objects ranging from astronomical bodies (like M51 shown above) to ram's horns (used in Festival of Light) and snail's shells. It can also be found in rates of growth (such as population growths).


Other composers, such as Bartok, have built moments in music around the Fibonacci series, but none have truly drawn the correlation between music and this series like JS Bach and now, in humble tribute... Stephen Melillo.  In addition to employing the Fibonacci Series across the many "Storm" works in micro and macroscopic ways, Stephen also draws from the early 1500s to create a musical version of a numerical matrix designed by Albrecht Dürer, and formerly called a "magic box." In it's new form, it becomes auditory in what Stephen Melillo calls a "34-Matrix." The 34-Matrix appears in works like ART OF THE STATE from MILLENNIUM to name only a few.


Stephen Melillo's 34-Matrix is symmetrical in as many ways as you can imagine! Consecutive integers to the number 16 are arranged so that choosing any patterned grouping of 4 blocks yields the sum of 34! The number 34 has symbolic meaning in Human History and is also the 9th whole number in the Fibonacci Series. This is why there is always something significant happening between measures 33 and 34 in all of the STORM works. This unedited, unabridged Matrix appears in his symphonic works as well as a piece entitled "34-Matrix" and several of the "storm" works.

The STORMWORKS Logo, like much of the Stormworks Music, is proportioned in the Fibonacci Series, which serves as the mathematical basis for the shape of playing cards, the Parthenon, sunflowers, snails, Greek vases, Rolls Royces and the great spiral galaxies... to name only a few.

Plato said, "It is impossible to join two things in a beautiful manner without a third being present, for a bond must exist to unite them, and this is best achieved by proportion."

C. Arthur Coan writes, "Nature uses this (the Golden Mean) as one of her most indispensable measuring rods, absolutely reliable, yet never without variety, producing perfect stability of purpose without the slightest risk of monotony."

Why does the smallest bacteria grow, as do horns and fangs, with the same relationship as a comet's tail spinning away? It is because of the logarithmic ratio expressed by the Fibonacci Series, a relationship which permeates Nature... and Music from the Storm!

Symbols: Consider 3's and its relationship to the Trinity or Pyramid which incorporates both the 3 and the 4, a representation of the 34 which is the 9th number in the Fibonacci Series, or the 3rd 3rd. Consider the 5-note motives and titles for another layer of meaning relating to the "5-wounds". These simple correlations will help those who sense the difference in Stephen Melillo's Music and lead them to a more complete experience and understanding of Music from the Storm.